You are here : Stories / Campbells-Lambs

Back In The Mists Of Time

It was a sunny Sunday afternoon in June 1935, when the Walter Lamb family of Ottawa were visiting their cousins, Dorothy Lamb and her nephews Percy and Jamie Campbell, who still lived on and worked the original Lamb farm on the Ottawa River at Lochaber Bay, Quebec. The farmhouse sat on a ridge about fifty feet above the river. A glassed-in porch on the front of the house gave a panoramic view of the river and the rolling farmland on the Ontario shore. Here in the porch Dorothy Lamb was relating stories of the early days on the farm to the visitors.

Suddenly her eyes took on a far away look and she said, "Way back in the mists of time in Scotland, the Campbells massacred the Lambs. Since that time the Lambs had no dealings with the Campbells. But," she continued, "when the Lambs came to Canada, there were Campbells on the next farm." "Then a Lamb married a Campbell," referring to her older sister, Margaret, who had married Percy and Jamie's father, Hugh Campbell. "And someday a Campbell will inherit the Lamb property."

One of the children present never forgot this story. The Lambs massacred! How could that be?

Fifty years later in 1985, the documented account of the 1646 massacre of the Lamonts, of which the Lambs are a sept, was found in Scotland in the Inventory of Lamont Papers, 1231-1897. The massacre described by Dorothy Lamb did occur "back in the mists of time in Scotland." [ref #1]

Right smack in the middle of the old section of the Lochaber Bay Cemetery is a monument with it's inscriptions melting away with the passage of time. The monument tilts abit to the south-west and shows a number of cracks.

This is the Campbell monument and was likely erect in the 1860s two decades after the young James Campbell (age 29) lost his life running logs down the Ottawa.

Extending south from this monument are the plots of nine Campbells. Digging further into the genealogy of the families of Lochaber Bay you discover four more headstones with Campbell connections into the MacLachlan and McCallum families. 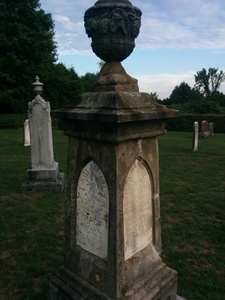 Who are these Campbells, when did they arrive and how do they connect to the families of Lochaber Bay?

The Campbells - the three brothers Neil, James, and Donald Campbell and their families, arrived in Lochaber from Argyleshire, Scotland in 1828, after a voyage of 13 weeks in a sailing vessel.

Neil Campbell and his wife Catherine McCallum settled on Lot 22 R2. They left their son Archie in Scotland to finish some schooling. He came out four years later with the McCallums, at the age of 12 years, and of course, could only speak the Gaelic. Neil and Catherine had 14 children and 8 of them are buried in the cemetery.

Neil's daughter, Sarah Jane Campbell, married John MacLachlan and had a son by the name of Rory MacLachlan. It takes 8 headstones in the cemetery to mark the burials connected to John MacLachlan - 2 of which are for his wives - Mary McCallum and Jane McDermid. We don't know where Janet McKillop is buried but Sarah Campbell and John MacLachlan are marked by headstone K20.

James Campbell, (oops: NOT the 2nd brother), married Flora Cameron and settled on Lot 21, R2. Their son, John Campbell, was the first white child born in Lochaber. Flora, along with her parents John and Susannah, are buried in Thurso in the cemetery on Galipeau Street.

Donald Campbell. the 3rd brother, also settled on Lot 21 Range 2 or 3 and married Sarah Campbell from Glengarry. Their one daughter, Sarah, married Malcolm McLachlan in the Dunvegan Church. Malcolm and Sarah started a long line of distinguished MacLachlans including Angus Campbell MacLachlan who wrote 'My Well Loved Country Home' which we draw so many stories from.

Sarah and Malcolm MacLachlan - B4

In 1831 the Lambs arrived in the town of Clarence, across the river from Lochaber, looking for land to settle. Neil Campbell, a member of the church in Clarence, told James Lamb about Lochaber on the Quebec side and ended up selling him the western half of his farm on Lot 22 R2.

Bay Hill and the Ridge

The early farm homes were built on what was called Bay Hill situated close to the river where the main highway runs now. Before roads, all the neighbours had trails established between the homes and other sites. To the east of the first Campbell home on Bay Hill was the the school house which burnt down in later years.

The first cemetery was between the Campbell and Lamb farms on Bay Hill. Alexander McCallum was probably the first interment in 1839 and is now marked by headstone F9 at the present day cemetery. This present day cemetery was established west of the Lamb farm up on the ridge with the first interment in 1859 of Mary MacLachlan (headstone D9). Today this area can easily be spotted from down the river with the microwave tower sitting on high ground across the road from the old Lamb farm. 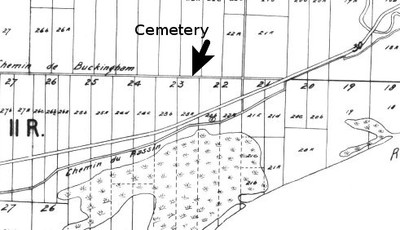 Tragedy on the Ottawa

The cutting of square timber and going to Quebec with the rafts was a break in the monotony of a settlers life.

James Campbell, a brother of Archie and son of Neil, lost his life going down on one of these rafts. He was swept off the raft at the beginning of the rapids, but swam nearly four miles after the raft. Some of the men on the raft threw a long heavy oar for him to cling to when it struck his head causing him to sink.

The young James Campbell (1816-1845) is buried at plot E7 and was probably the first inscription on the Campbell monument at E3.

One has to think this is one of the earliest burials but the story is that Alexander McCallum was the first buried at the site in 1839 marked by headstone F9. Of course if the cemetery 'moved' around 1870 up to the present location on the ridge, then perhaps the headstones came later.

The first schoolmaster at the school was Duncan McDermid, a very fine old gentleman who was a very strict disciplinarian and did not believe in sparing the rod when it was justly needed.

One day the school children all went in a body to see where the wolves had driven one of Campbell's cows into the deep mud and killed her. Betsy Campbell got caught in a bear trap. The children were not strong enough to release her so hurried off for help to Campbell's who went with bars and released her. Betsy carried the scars as long as she lived.

Rev. Archibald Campbell (a son of Neil and Catherine) was quite famous in the region. Remember he is the son that finished his education before coming out to Lochaber with the McCallums.

By 1875 Archibald and his wife had six children and on a cold night just before Christmas the big log house built by his father caught fire and burned to the ground. Mrs. Campbell and the children had to escape in their night clothes and Archibald had to see his library of valuable books and all the family records go up in flames. Their good neighbour, Mr. James Lamb, came with his team of horses and sleigh, covered with blankets and quilts, to take them to another shelter. It meant that they all had to move in with their grandmother and Aunt Bella until the new brick house, Riverview, was built the following summer.

Rev Archibald Campbell and wife Margaret Angus can be found at headstone M17. 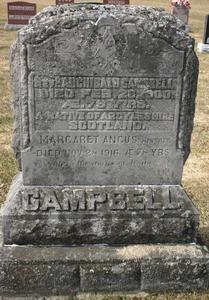 In 1885 Hugh Campbell (not related to Neil and Catherine) married Margaret Lamb - daughter of James and Sarah Lamb. Unfortunately the birth of their 2nd son, Percy, did not go well and Margaret passed away a few days after. Hugh (twice now a widower), could not handle it any more and took off leaving his two sons with the grandparents James and Sarah to raise.

Percy Campbell is remembered for his fondness for animals, particularly his horses. When James Lamb passed away, he left the farm to his daughters and grandson Percy. Dorothy Lamb gets another one right!

In 1955 Percy sold the Lamb farm and moved to Lindsay, Ontario to be closer to family. Percy passed away in 1972 at age 84 and is buried near Sunderland.

We are very fortunate to have so many descendants interested in recording their family stories and sharing records.

Here is a list of references where you can learn more about the characters mentioned in this article.