You are here : Stories / MacEacherns

It is 1745 and "Neil MacEachern" has escaped to France from England with Prince Charlie. He changes his name to "Eachan MacDonald" because he knows that the French have trouble pronouncing "MacEachern". With good fortune, he marries a French lady and one of their sons becomes a famous general in Napoleon's army. [ref 1]

"MAK-EHK-uhrn" is a good start! If Fletcher MacEachern was still living down the road from the cemetery, this is how he might introduce himself:

We first hear about the MacEacherns through Duncan (born 1801) who married one of the famous McDonald sisters – Marion.

Duncan and Marion immigrated to Canada in 1832 along with the McCallums and MacLachlans. Yes, John McCallum married Margaret McDonald and Robert MacLachlan married Mary McDonald - 3 sisters!

The McCallums made their way to Lochaber Bay and settled on Lot 23 range 3 and the MacEacherns and MacLachlans decided to try settling in Breadalbane – close to present day Dunvegan, Ontario.

Four years later the MacEacherns and MacLachlans headed up the river to join the McCallums as neighbours on Lots 24 and 25. Arriving in Lochaber Bay they came upon a burial on the shore and sadly it was Margaret. This would have been 1836 at an early cemetery close to the shore. It's possible that Margaret was the first burial at this site! [ref 3]

Between 1830 and 1846, Duncan and Marion MacEachern had 9 children. They both died when they were in their 60's. They are buried together at the cemetery and marked with a modest headstone. (D1) 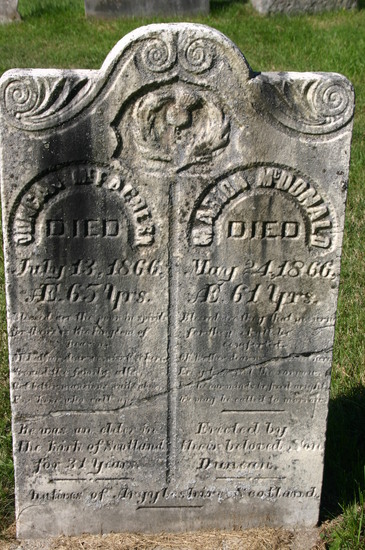 Descendants of Duncan and Marion

With the MacEacherns well established on the shores of the Ottawa river, it is not surprising to find Duncan and Marion’s descendants popping up everywhere in the next 100 years!

Following the headstone trail, Headstone C1, at the head of Hugh’s plot, reads: “McEachern: In Memory of Margaret wife of Hugh McEachern died 1868". Our graveyard records indicate that Margaret is buried beside "Hugh McEachern". We have no information on Hugh although it seems likely it was Duncan and Marion's 2nd born son as Duncan and Marion are buried close by. 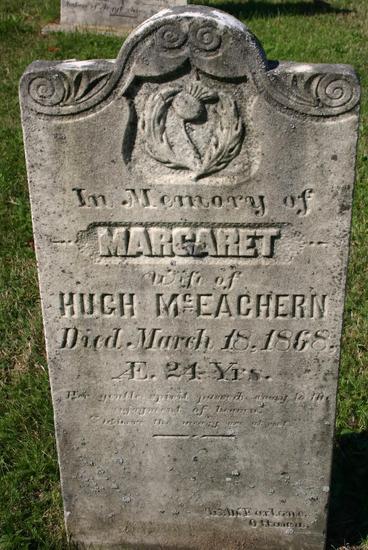 The other headstone in the vicinity is that of Annie MacEachern (E1) - Duncan and Marion's older daughter who married Charles McInnis. Annie and Charles had 4 children. Charles moved to the USA and in the 1910 US census was living with his son Duncan and family. He died in 1921 and is buried in Ohio. 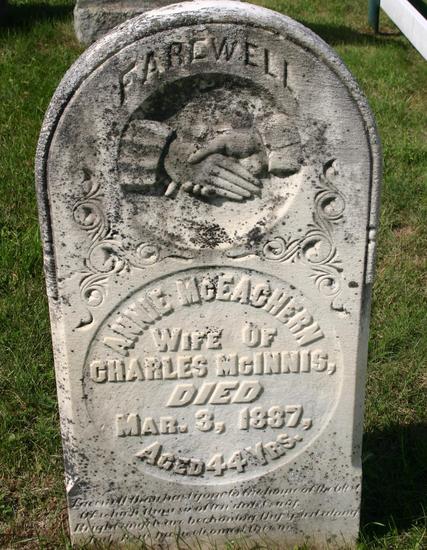 The third headstone in this generation is that of Alexander Fletcher MacEachern (K17), Duncan and Marion’s 5th born. That makes 5 sons in a row! Alexander’s first wife is Elizabeth McKinlay who passed away 1879 after giving birth to 3 children. Elizabeth has her own headstone K13 and died at age 40.

Alexander then married Anna Jane McDermid, 19 years younger than he. They had 7 more children. It is unclear where Anna is buried but she lived to the year 1939 and was well known in the community. There is an ‘empty’ MacEachern plot (K14) beside Alexander’s first wife .. perhaps it is not really empty!

In happier days we see Alexander’s son Fletcher taking over the farm in the 1900s and it is at this farm that the Old Boys’ Reunion of 1912 is staged. What an event with people all over the country and abroad arriving for the festivities! It is Fletcher’s uncle Neil who is in the Old Boys’ picture and his cousin Donald Alexander MacEachern, the secretary/treasurer of the cemetery committee, who likely penned a most interesting account of the reunion![ref 4] Fletcher MacEachern also appears with Rory MacLachlan and John C McCallum on the cemetery's Letters Patent of 1936! [ref 5] 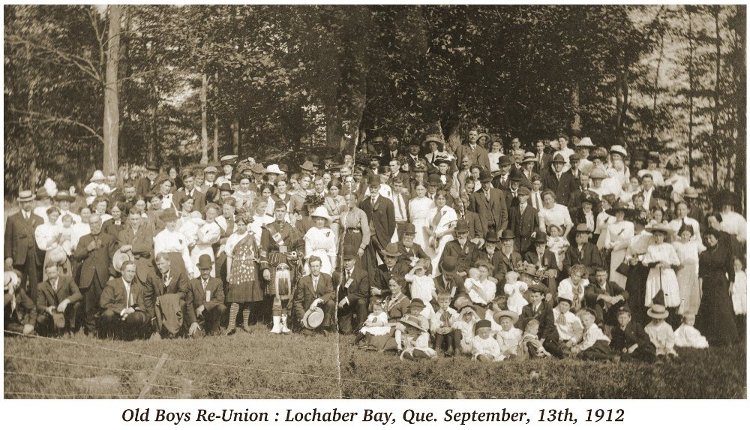 This reunion took place at Fletcher MacEacherns farm - down the road from the cemetery. [ref 6] 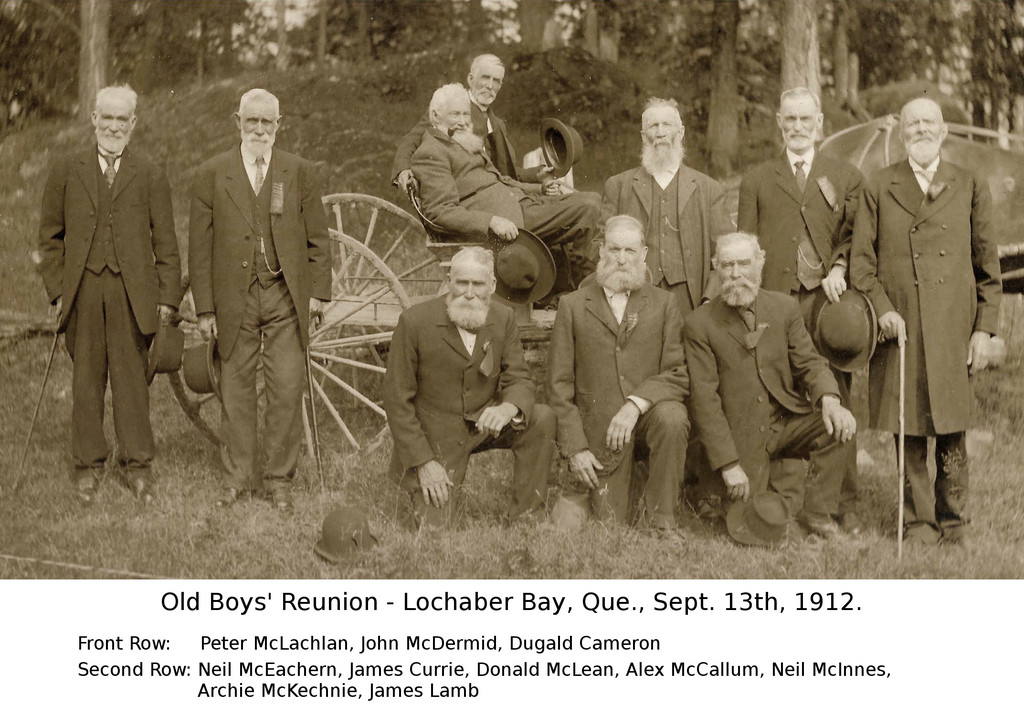 Fast forward to 2012 and we have 'Laurie MacEachern' as our highland dancer for the "Lochaber Bay 1912-2012 Reunion" at the cemetery. The MacEachern links to the cemetery never cease to surprise us! [ref 11]

Well of course one never comes to 'conclusions' when doing genealogical research! I fully expect people to contact me with errors/omissions and distortions. I look forward to your emails!